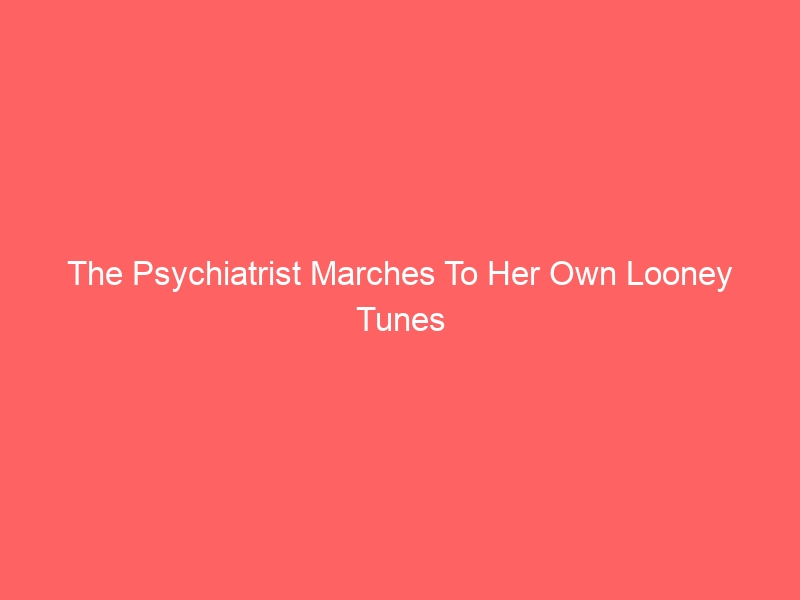 02 AugThe Psychiatrist Marches To Her Own Looney Tunes

A Tale From Past Trekking Adventures-Worth Revisiting

Thus, today I was riding the subway to the Westside. It is such a fantastic city, so large yet with so many small communities within its confines. Each area takes on its personality with a myriad of colors. My traveling has taken me from Chinatown to City Hall to Soho to Harlem to the Eastside. I have crisscrossed the city; it seems 1,000 times. Surrounding this Westside apartment was large ornate, picturesque apartment buildings and apartment dwellers with a bohemian vibe. The coloring of the leaves in the park was bright and vibrant, jumping out at you. Bright sunlight was sparkling all over the expansive buildings. My closing was at an apartment overlooking Central Park; the closing documents listed the borrower as a Psychiatrist.

Does History Repeat Itself

Therefore, from my own experiences, meeting any Psychiatrist is a nutsy experience. I was wondering if this experience would be no different. Little did I know my intuition would not be disappointed. Upon entering the building, I told the doorman I had an appointment with Dr. Bronfman. Entering the elevator bank, I went to the 19th floor. Greeting me at the door of 19C was the Doctor. Dr. Marian Bronfman was about 40 and had striking looks. She was tall with a super figure and glowing in a tight blue floral dress. Amazingly, this Doctor looked more like a model than any Doctor I have ever met.

Accordingly, I froze for a split second as my eyes became fixated on her statuesque figure. So, upon recovering, I began walking into her dining room as I passed ornate décor at every turn. The home was a traditional old world overly embellished Westside apartment. Yet, I kept noticing all the old-world art on the walls.

Can This Be True

Hence, when I was sitting down, the Doctor excused herself, walking to get her husband. She came back into the room with a man; dressed in an expensive suit with a red tie and sitting in a wheelchair with a portable oxygen tank. The man was gaunt and looked like he was 80+++ years. I immediately thought this was the Doctor’s Grandfather, Father, or Great Uncle. The Doctor began introducing the gentleman as her husband, Joseph, showing no external reaction to what I was seeing. Therefore, I felt I was a stand-alone character with no acting part in a movie. Am I in a scene with a beautiful model with a zombie?

Consequentially, the young Doctor’s husband was an old relic. I kept smiling and saying hello to her husband. All the husband could do was keep nodding and mumbling his gestures. All of this took place as the oxygen tank kept humming along with thud, thud, thud, and another, as the air was pushed into the husband’s lungs by a tube and wrapped around Joseph’s face as the air pumped away.

Under the circumstances, the Doctor sat down at the table all the time, attending to her elderly husband. The machinery helping Joseph’s lungs sounded more and more like a large compressor as the thuds resounded. As the closing began, a large screen TV echoed in the background with Donald Trump at a campaign rally. Joseph mumbled that Donald was wearing a red tie. The husband stated he always wore a red tie because of “the Donald,” a fellow New Yorker. So here I was on the Westside, the bastion of NY Liberalism, with a statuesque Doctor and an elderly husband tied to a tank and a wheelchair. So many signals pointed to the Democrat left.

Wow, Moments One After the Other

Therefore, I was in for a rude awakening. Remember my internal brain waves saying, “wow,” this entire episode is an out-of-body experience. Trump was delivering one of his typical speeches. The closing stopped as the Doctor, and her frail husband turned their attention to the TV. As Trump spoke in his bombastic manner, the Doctor kept looking at me, stating the following. “As a Physiatrist, listening, interpreting, and what people are saying and not saying are my professional duties and responsibilities.”

Subsequently, the Doctor went on telling me she reads speech patterns. The Doctor stated that she knows that not everyone understands Trump as a man. Continuing, “the one thing I do know is that Trump is a dedicated and loving father. Therefore, in my professional opinion, he is a perfect man. Besides, I support Trump in the coming election as he will take care of the country and its problems”. I thought I was in shock, not believing the words I was hearing. I was ready to take some oxygen from her husband’s tank as Joseph just nodded and mumbled in agreement.

Staying Apolitical On the Outside

As a result, I was sitting there, speechless, listening and deciding on the spot not to respond. Thus, smiling and continuing with the closing. The only delay was the husband’s mumbling and water requests as the oxygen tank kicked in with the husband’s heavy breathing. Once again, walking away from a particular closing, though I had seen and heard it all. Once again, the intersection of politics, real-life New York, and stories. In conclusion, life keeps imitating art.